A project for an archaeological research and conservation of the Gradishte Thracian fortress was concluded this year. This archaeological landmark is in the Gradishte neighbourhood, 3.5 km to the south-west of Gella village. It is situated on a stone hill with a north-east/south-west orientation, to the north of Shilesta Chuka Mount. The Thracian fortress is at about 1850 m above sea level. To date there is no data about another archaeologically  researched Thracian fortress at such height above sea level. The builders have utilized to the fullest extent the natural layout which makes harder the approach to the fortress and correspondingly - contributes to its easier defence. A one-hundred metre precipice serves as a wall to the east.
The fortress wall is built along the north, west and south slopes of the hill. It envelopes an area of about 3000 m2 with an approximately oval form – 140 m long and 45 m wide at its maximum. The Gradishte Thracian fortress is the biggest in the Rhodope Mountains and is among the biggest fortresses ever built in the high parts of the mountain. The archaeological  excavations have shown that Gradishte has had two fortified walls: an inner one enveloping only the highest and relatively level part of the rocky hill; an outer – a bigger one enveloping the hill up to the saddle to the south, which connects it to the neighbouring mounts of the Perelik ridge of the Rhodope Mountains.

How to get there

The transit to the Gradishte fortress is about 1 h 30 min long and the beginning of the trail is at the hotel car-park, most of it  is well blazed. It starts along  the asphalt road to the Trendafilovska quarter and after several turns enters the quarter, you pass by a white newly-built house/on the right/. The road turns sharply to the left, then – to the right and reaches a road fork with a sign pointing the direction to the Gradishte fortress. When you reach a level open section you will see the tourist shelter at the beginning of the forest. Before it – to the south and up – there is a detour and a marking which leads through St. Marina chapel/20 min/ and a panoramic road/30 min/  to the Gradishte neighbourhood/1 hour/. After a short climb the road levels and in about 10 min comes out in an open area among fields and meadows. Then it goes on climbing to the south up a steep hill and after a while – comes into a wood. In the wood the road passes by St. Marina chapel and again comes into an open area. In about 15 min it reaches the so called ‘panoramic road’ which you have to cross and go along a track into the clearing opposite you. Above the clearing the slope is steep at some places. At first you walk along the border of the cut trees and after you reach the first rocks, the ridge turns south-west. Follow the track carefully because it winds among rocks and roots, at the end of the climb you will see the eastern part of the fortification. 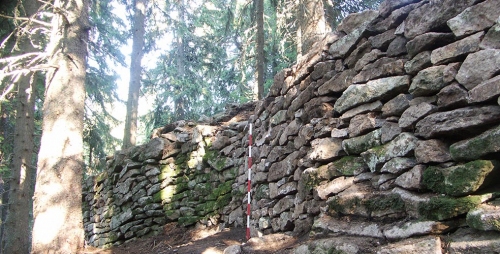